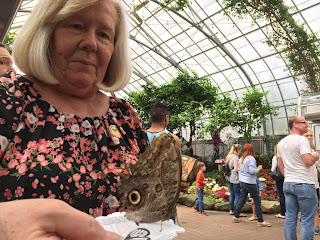 People travel far and wide to enjoy the world’s countless wonders. As it turns out, sometime the most beautiful things are just around the corner. The locals are likely to ignore them until someone from out of town comes along and… we discover our own backyard.

This is what happened to me yesterday. My dear friends Judy and Chris came up from Louisville to check on me and be sure I am on my best behavior after open heart surgery (I am). It was a beautiful day and we drove to Eden Park to see the Great Monarch Butterfly Show at the Krohn Conservatory. The last time I had been there was in 1998 when my niece had crossed the Ocean to come to visit. 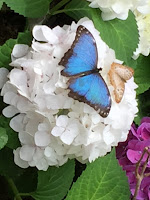 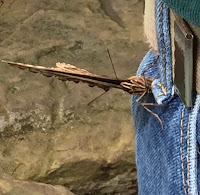 The three of us had a wonderful and peaceful time. Mercifully, at Krohn's there are lots of places where one can sit down and let these wonderful creatures come to you. There were butterflies of all sizes, ages and colors fluttering all over the pavilion. Children and adults alike tried all kind of tricks to have one of them land on their hands, head or clothing. It was fun watching people just as much as it was watching the butterflies.

We decided to sit down near the flowers and leave the initiative to the critters. Eventually a large one came to rest on Chris’ jeans first, before settling down on Judy’s little paper holder. And there it sat for the longest time. It needed a rest just like me. It was older, a volunteer explained, the edges of the wings were a little frayed and it only had three legs. We sympathized! 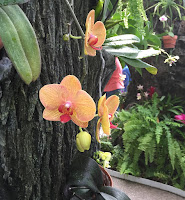 There were lots of other wonderful and eye-filling surprises: marvelous orchids, the rain forest, desert cacti, the Japanese pond with red fish yea long, a waterfall and comfortable benches everywhere, thank God.

We covered a number of other spots and had an abundant meal of what is commonly referred to in the States as “Italian food.” But above all, we enjoyed our old friendship going back to the 1950s. It doesn’t get any better than that: friends and butterflies on a comfortable bench in the shade.
Posted by www.joeat80.com at 4:35 PM No comments: 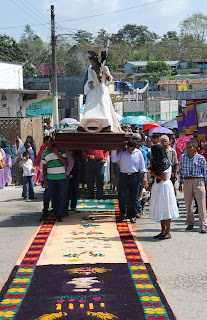 The highlight of Good Friday in San Luis, as in most Guatemalan towns, is the live re-enactment of the Way of the Cross as part of a long procession during which the statues of Jesus, His Blessed Mother, Mary Magdalen and the Apostle John are carried over beds of flowers, color sawdust, and even fruit. All the people of the town take part in it either as actors, carriers or spectators.

The youth organizations were in charge of the live Way of the Cross, putting their heart and soul into creating a realistic scene at every station while following a very precise script.

Then it happened. The narrator intoned:  “Fifth Station, Simon of Cyrene is made to carry the cross.” On cue, a “Roman officer” shouts the order to his cohorts: “find someone to help Jesus of Nazareth carry the cross!” 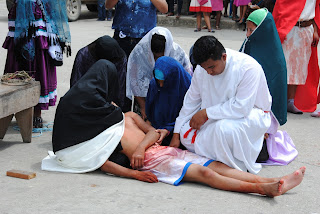 But before the “soldiers” had time to grab the reluctant “helper,” a voice rose from the crowd: “I will do it! I will do it!” and, to everyone’s surprise, a young country girl came forward and picked up the cross.

She faced the “soldiers” and stood her grounds. And the Way of the Cross moved on to its deathly conclusion refreshed by this simple and spontaneous act of faith and compassion.

A LETTER FROM THE "END OF THE WORLD"

LAST YEAR at this time I was visiting my old friends in San Luis Petén, Guatemala. Here is a fond recollection of March 2016: 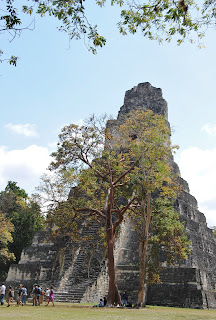 “TIKAL! The Temple of the Jaguar! The well-known actor Morgan Freeman was here not too long ago to get inspiration for his National Geographic series on God and had his picture taken in front of the pyramid just like the rest of us residents and tourists. The reason? According to Hollywood’s malarkey the world was supposed to come to an end on December 2012, but… it didn’t.

The movie’s opening scene shows the Temple of the Jaguar crumbling like an old pile of rocks. The descendants of the Mayan Empire, including our parishioners, are still laughing about it. In fact, the Maya are among the rare people who DO NOT believe in an Apocalypse. They believe in widening cycles of history. Go figure! 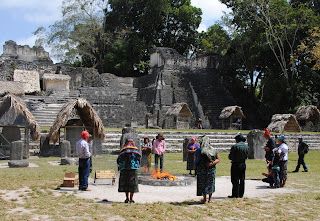 On Easter Monday 2016, I concluded the month of March – my favorite – with a “pilgrimage” to Tikal. While tourists braved 90+ degree temperatures to climb the 200 steps of the tallest temple, I sat in the shade of a massive 1,000 year old ceiba. From there I followed the members of an extended Maya family as they prayed to God and Mother Earth, turning to the four corners of the earth with raised hands and offering a burning sacrifice of corn, cacao, beans, candles and incense. 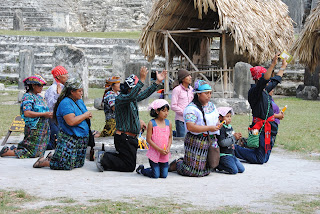 The empire, of course, disappeared centuries ago, but the Maya are alive and well, and so are the Comboni Missionaries who have been sharing their lot and the life of more recent settlers since 2005. I joined them in 2007 when I decided to celebrate my 70th birthday by dropping office life and taking on this new adventure. It was my birthday gift to myself – a keeper as it turned out. 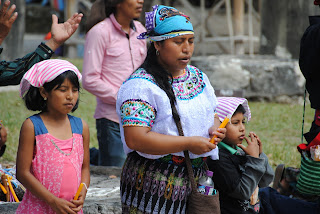 The love of color, the contemplative style of their prayer, the respect for mother earth and for all of creation, all typical traits of the Maya culture, have blended well with the Christian roots planted by Dominican Friars centuries ago. Our liturgies are greatly enriched by all this. I will enjoy and absorb every bit of it while I can.”
Posted by www.joeat80.com at 8:24 AM 1 comment: 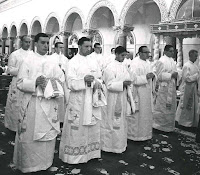 March 17, 1962. It was the Saturday before Passion Sunday and a traditional day to hold ordinations to the priesthood. A number of candidates crowded the altar of the beautiful church of the Immaculata on the grounds of the University of San Diego.

For the first time, there were Comboni students among the candidates. We stood in alphabetical order: myself; Dino Chiavegato who later chose a different path; Caesar Mazzolari, who would later become the bishop of Rumbek; Peter Premarini, currently in Covina, Calif. 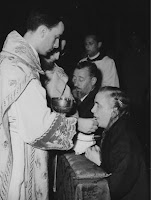 The church was packed with family, friends and fellow parishioners of the local candidates. It was different for us, Comboni Missionaries, because our families were back in Italy and we had not seen them in over five years. Fr. Gabriel Chiodi, our superior, had been able to organize a number of newly found friends who showered their missionary concern, love and in time lasting friendship on each of us.

My parents had to wait until June 21 when I was able to celebrate Mass in my own parish in Italy and give them Holy Communion.


March 17, 1962 marked the beginning of a great adventure in the typical all-or-nothing Comboni way. Gladly, it isn’t over yet.
Posted by www.joeat80.com at 8:28 AM 2 comments:

THE HERE AND NOW

I was actually born in Milan, Italy, in 1937. This, among other things, makes me a survivor of WWII. God’s hand  led me to the missionary life and, this coming Friday, March 17, I will celebrate my 55 years as a Comboni Missionary Priest.


God has blessed me with a full and rewarding life where daily routine and crazy adventure have both been an integral part. I consider myself one of God’s survivors. What happened to me on February 1 has me convinced that, if ever my life had a purpose in God’s plan, this last part certainly does. On that day I experienced the signs of an impending heart attack. On February 8 I had open heart surgery for multiple bypasses. This date is now my second birthday.


As I look back on what has happened to me since February 1, a single word stands out: GRATITUDE. Gratitude to God for giving me a second chance to life. Gratitude to the entire medical system of Mercy Anderson in Cincinnati that made it possible. Gratitude to each and every one of you for your support, help, prayers and concern. I had some very dark moments, but in unexpected ways and at different times, you made them bearable.