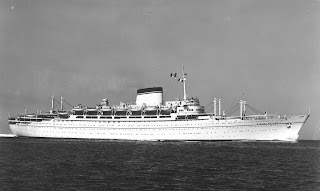 It is September 14, 1957. Early dawn. The majestic Italian ocean liner Giulio Cesare is slowly drawing closer to its dock in Midtown Manhattan. I’m standing on deck together with a few hundred other passengers. Through the early morning mist, we see the blurry silhouette of Lower Manhattan in the distance and, standing majestically to our left, the Statue of Liberty. This is what got us out of our bunks at dawn and made us rush topside. It’s like being on a movie set and it’s all very, very real. Too real even for words.

****
I had turned twenty the day before, still at sea, while the Comboni presence in the United States, which eventually developed into the North American Province (NAP), was just shy of eighteen. The first Comboni Missionaries, then called Sons of the Sacred Heart and known as Verona Fathers, had arrived in the USA in November 1939. 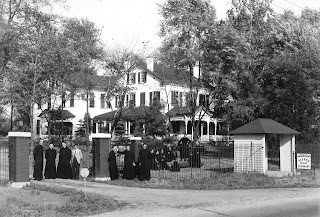 I was stepping into a world I knew nothing about, except for what I had seen in movies while growing up in Italy. I did not know English, I did not know the culture, the customs, the patchwork of Christian beliefs, differing church buildings, and traditions. I soon realized that most of the Comboni Missionaries I met at the time had started out just like me. Somehow, they survived, thrived, and become movers and doers for God’s Kingdom in this new world.

We were not sent to the US just to study, but to establish a presence here. Tossed into a community of American-born novices, I started the never-ending process of integrating the old and the new. I want to tell you what I call the “hidden story” of the Comboni Missionaries in North America. I hope that faithful old friends across the country will appreciate the effort. 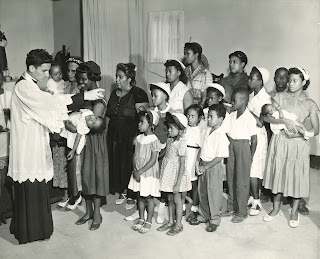 In 1939, as we were looking to gain English-speaking members for our African missions, Archbishop John McNicholas of Cincinnati needed ministry in the black communities of Cincinnati’s West End. We adapted to a totally new culture, a new church, and even faced a new evil: segregation.
How could we cope with these new challenges? Just as we always do. We listened. We learned. We adapted.
Comboni Fr. Dominic Ferrara, later bishop in Sudan, was pastor of Holy Trinity, located roughly where the middle lane of eastbound Pete Rose Way is now. He took note of a musically inclined altar boy by the name of Clarence River. Recognizing River’s gift, Fr. Dominic fostered the kid’s talent and, eventually, his priestly vocation. Liturgical music in the USA would never be the same. In those days we also gave new life to the inner-city parishes of St. Henry and St. Anthony. In time, cement and warehouses took over and people were flushed out by business interests. 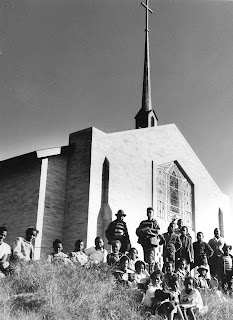 In the 1950s, Louisville, Kentucky, needed a presence in its West End. It was not what “respectable people” of the time would call a desirable assignment. Comboni Fr. Alfio Mondini went there, said Christmas Mass in a barn, and opened what would become a very successful parish and school, Immaculate Heart of Mary. Fr. Giles Conwill, a nationally known Afro-American priest and preacher, grew up in it and so did notable lay Catholic professionals. As children and teenagers, several of them belonged to a Christian theater group under the direction of ever-cheerful, always smiling, and long-suffering Comboni Fr. Sam Baiani.

Were we then typecast as ministers to the black community? Not so fast.

In Monroe, Michigan, where I was a novice in 1957, people are still connected with Comboni Missionaries down to this day. Why? Because they cannot forget our poor beginnings, our untiring help in the parishes, the night calls at the hospital, the countless missionaries they have met. We found a settled community of faith and adapted to it, filling it with the missionary flame. 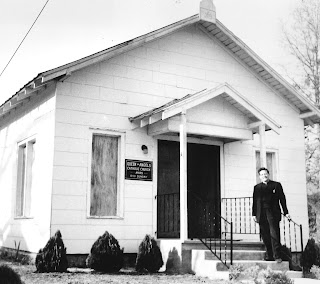 If you were a Catholic in the 1950s, rural Georgia was not the place you wanted to be. One missionary group labeled it “No Priest Land USA”—part of a vast stretch of 3,000 counties where only a thousand had a priest in residence—and founded a congregation specifically to minister to places like that. Yet, when the archbishop of Atlanta looked for help to cover the most depleted areas in the farthest corner of the state, four Comboni Missionaries settled in eight counties to minister to the flock—which was just .01% of the population.

Crosses were still being burned on Catholic lawns and Martin Luther King was still marching in neighboring Alabama when Comboni Fr. Walter Mattiato, by being his kind and adaptable (albeit unbendable) self, became the first Catholic priest to be admitted to the Ministers Association in his county. Some of those small communities, where a dozen Catholics met for Sunday Mass, are now thriving, multi-ethnic parishes.

The popular slogan “Go West, young man” did not escape the notice of early Comboni Missionaries. Back then, poor migrant workers from Mexico ensured our nationwide supply of fruit and juices, but who could speak to their unique pastoral needs? The Comboni Missionaries adapted to a farming migrant routine to turn places like Irwindale and Hermosa Beach into thriving, large, living Christian communities. Plush upscale neighborhoods have since replaced those luscious, rural orange groves of Southern California. 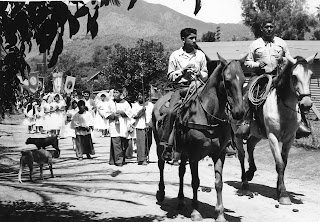 There were also Native Americans out West. They lived in reservations and no one seemed to be particularly interested in them. Brave Comboni Missionaries, once again, adapted to the situation. People like Fr. Januarius Carillo and others took over San Antonio de Pala, an adobe chapel of the old Camino del Rey that had been reduced to a pile of mud. Carillo needed help and was not ashamed to beg, encourage, and cajole. When it helped, he played on the guilt complex of concerned Americans when faced with what we did to the indigenous population. He concentrated on the Hollywood crowd—several stars had ranches in the area—and enlisted the likes of Frank Capra, Raymond Burr, Ramon Novarro, and Jack Haley (the Tin Man from The Wizard of Oz) to build a school. Joseph Kearns (aka “Mr. Wilson” from Dennis the Menace) even rode his horse to San Antonio for Mass. Then Father had some cedars cut down on Mount Palomar, talked the Marines of Camp Pendelton into moving them to Pala for use in building a school. Brother Jerry Charbonneau launched a national campaign to collect Green Stamps (remember the Green Stamps?). He got enough to buy a school bus.

At one point we thought French Canada, a bedrock of Catholicism, would fill our seminaries, so we opened a French-speaking presence. Ontario, some old timers were saying, was “too Protestant” for us! But, when Church life crumbled in Quebec, we relocated successfully in Ontario and we are still there today to serve and share. 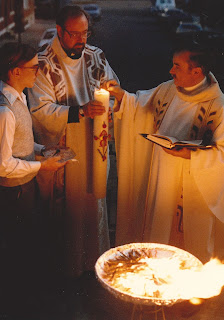 By the 1960s, the picture had changed in Cincinnati as well. People from Appalachia were streaming north in search of a better life and Cincinnati was the first stop for many of them. Several families settled in Lower Price Hill, an area that had once been a thriving old German neighborhood, with St. Michael Church at its core. Old anti-Catholic feelings ran deep among the new residents. Was the parish going to die? The Comboni Missionaries—Fr. Val Saoncella and Fr. Louie Gasparini among others—adapted to the challenge and turned St. Michael into a model of a “missionary Church,” just like we do on other continents, with evangelizing teams, neighborhood outreach, and empowered lay leadership. And that is how we returned it to the local Church a generation later: small, unique, alive. (Unfortunately, it did not fit the “maintenance Church” system prevailing in the United States. But you cannot say we did not try.)

Now it is the turn of the Hispanics. In the early 1980s, when high chancery officials were stating openly that freshly arrived young Guatemalans were a big question mark, it did not take long for the Comboni Missionaries to forge a new path in the Church that once took us in as immigrants in 1939. Fr. Bill Jansen became the leader of the new flock and pioneered what is today the Archdiocesan Hispanic Ministry, still in the care of the Comboni Missionaries down to this day.
We are smaller now, and we are older: This year the North American Province turns 80 and I turn 82. It has been a long, exciting, life-giving ride through the life and mores of the United States and Canada. Godspeed to the newcomers: listen, learn, act, be adaptable, be creative.